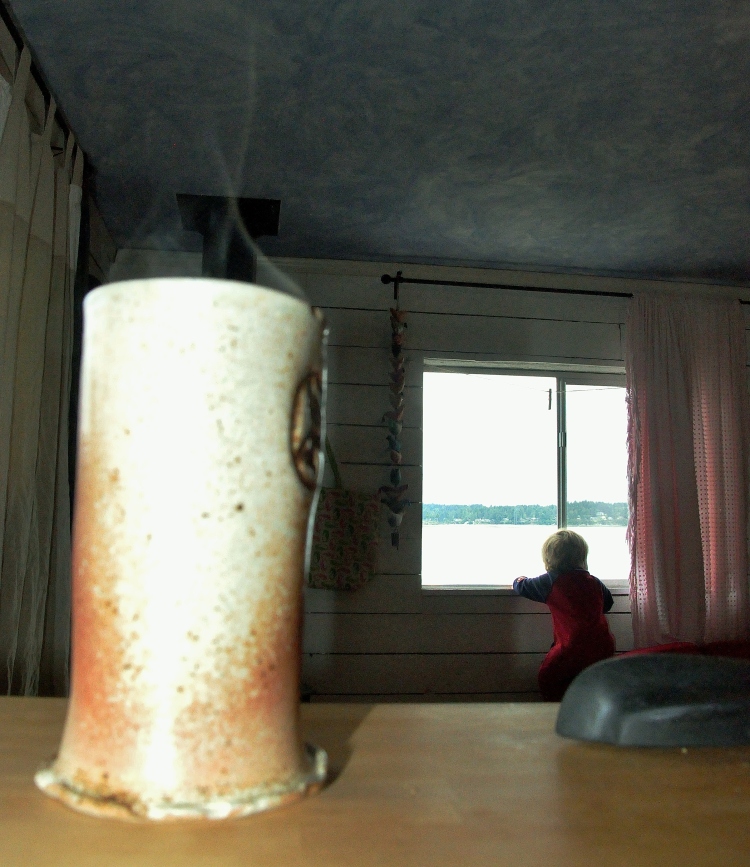 steam rising with the day

We woke early. Five thirty gray dawn. “Just give me another hour,” I futilely begged. “Then I’ll make some eggs for you.”

Yesterday was a hard day, but sometimes the hardest days present the best opportunities for grace.  An elderly southern doctor, shuffling in cowboy boots and white coat, informed me that though he could hear a murmur in my boy’s neck he is healthy as a horse.  He told me that sometimes the murmur will happen in the neck and the chest will act like the body of a banjo and make it resonate much larger than it is.  His banjo analogy made me want to follow him home like a lost and hungry grandchild, sit at his kitchen table and eat Saltines with him.

I was reading up on the shorter of those poetic forms as a means to follow an idea.  Then I was uploading photos into facebook, then commenting, then scrolling and you know how it goes.  Nearly an hour after I began I’m no closer to the creative move I’d intended to make.  BUT I’m not willing to call it off or put it off for another day.  YES! I want to be more, do more, show more, make more SO no time like the present.

The idea came from an inclination to imitate, but not totally copy my hard working, easy to adore, writer friend Anna Pulley who began churning out “Haikus for Adulthood” after a series of pretty big life changing events.  And she hasn’t even turned 30 yet.  As I mentioned, she is hard working, which is not something I feel I am.  I feel like I work hard, but not necessarily smart.  More on that when the ability to delve into my personal and personality in writing, in public, becomes possible again.  Processing life altering events combined with heartbreaking disappointment and the process of boxing up an entire set of dreams is… Well that’s what I’m in the process of, and while processing it I haven’t exactly been able to discern how to talk about it — outside of desperate phone calls to my girl friends and mom and drawing in my notebook and reading advice columns for entire days and watching entire series of Mad Men at a time and so on.

A few days ago I wondered, when other people are experiencing heartbreak, what kind of music do they play for themselves?  Are you a torch bearing kind of heartbreak person, a headstrong “I will survive” diva, a “I’m not looking back” howler?  Do you avoid such “life wants a soundtrack” kind of antics?

I went to a bluegrass festival this weekend.  It’s been at least eight years since I was at something like that.  I had hopes for dancing until sweaty and sore thighed.  I did not make that happen, as life with a toddler and heartbreak and hurdles is different than life as a single lady with grain alcohol in her hands, but I did enjoy a good deal of the event.  In particular, there was a five piece female group that moved me to tears whether singing ballads or two step jingles.  I bought their CD and am excited to be on a home-grown bluegrass kick for a little while.  Nothing like wishing you were drinking and listening to songs about drinking to make you feel a little more normal.

Ask the following question about every possibility that comes before you: “Will this help me to master myself, deepen my commitment to what I want most, and gain more freedom?”

A few weeks ago someone told me that I was running away from my creative process.  I thought a lot about that and eventually came to the conclusion that I couldn’t argue with that.  Furthermore it seemed to me, as I considered things, that I’d been doing so since forever.  I’ve always felt like writing was of the utmost importance, but I’ve never pursued it publicly.  I’d listen to winners of the elementary school Young Authors contests and think shaming thoughts about how I could have won that if I’d entered.  It is easy to be a star when you never take the risk of actually being seen.

I haven’t traveled yet, the path of figuring out where and/or how to “get” published but what I am doing is creating the writing habit as many days a (work) week as I can.  I spend at least an hour every day of the week on my butt with my fingers on the keys or a pen to paper with the intent of building some writing chops.  Culling ideas from the mish-mash of the multitudinous unformed inspirations that whiz by me weekly.  It is working, sometimes.  Some times I spend an hour typing things like “la la la I wish I was asleep boo boo boo I am tired pee pee pee I want some coffee but I’m going to sit here and type instead of getting up and opening myself to the possible distractions of the house hold.”  And some times! I get stuff like this.

“Can we take it home, Mama?” She frowned and I did a few jumps up and down.
“I don’t know, darling.  It seems like someone will, doesn’t it? But I don’t know that it’s gonna be us.  We don’t know how or why it came to be here and to me that means we aught not to remove it either.  I’m hoping no one else will drag it off, or if someone does that it be an animal who uses it for good somehow.  I know, love. I’d like it as a treasure too, but we’ll have to keep the memory and the mystery as a treasure enough.”  She was quiet and then she said, “Hey! We’ll take some photos! I have my camera, will you take photos to show to Papa?”
“Oh yeah! Papa will be sorry he missed this.”
“I dunno,” she said.  “Your Papa has seen a great many things we cannot even imagine.  Maybe this will give him a memory and he’ll tell us something about living in Blackfoot with your Gramma when he was young and exploring.”

The above is from a short story.  One day I got the urge to be signing blues songs so I just began making them up as I did my daily business.  A song came out with a line “Mama took me down to the river bed / show me something I never seen” and that somehow grew itself into a story last week.  Its a simple story with a visible mother and son character and invisible father and animal characters.  I like it! I have no idea what to do with it now. Yet.

You wear clothes carelessly as if you
could go naked or shod no matter the
conditions. I breathlessly marvel – seeing
your body.  My eyes travel from naval to
the cushiony diapered vee of your crotch
and down to heart-breaking ordinariness – where
knees curve and meander into calves;
your legs are crossed at the ankles.  I am knocked
asunder at the regularity of your animal
body doing things mine also does.

That is about from the middle of a poem I began just over a month ago.  It’s in its third revision right now and I’m currently calling it “Love Poem for the Body of My Son.”  I’m just happy I’ve had the tenacity to revisit the poem three times so far.  Usually I spit a poem out and call it quits.  I feel, know full well, that that does not a poem make.  Even the masters, actually, especially the masters revise.  I think too, though, the masters write.  they write a whole heap of a lot.  And that is exactly what I intend to do.

I was loaned J. Ruth Gendler’s Book of Qualities in 2008 and have fondly remembered it since. The first passage is on the wind. It comes back to me again and again… much like, you know, the wind. END_OF_DOCUMENT_TOKEN_TO_BE_REPLACED 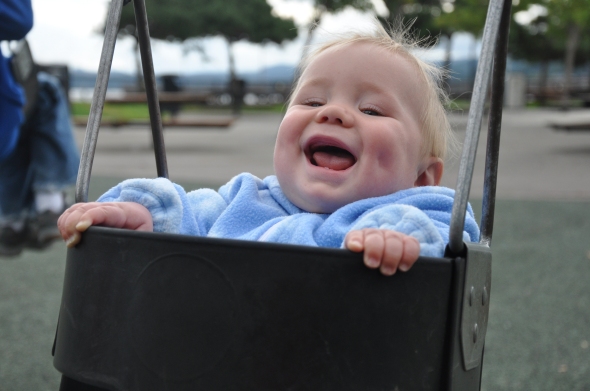 Salamander: toothless and loving the swing at 10 months

Today I made healthy meals and fresh bread (Mr. Bread helped).  A few points worth making: organic, local carrots sliced into coins and boiled until just tender are unbelievably buttery; ground flax seeds are quite versatile – add to smoothies or sprinkle on top of whole wheat pasta with home-made tomato sauce.

We’re going to check out the swings at the park now.

I wish to be doing 240 ab-crunchers (6 sets of 40) every night before bed, as regularly as I now floss and brush before bed, in the future.

I don’t feel like I can commit to saying I will make my wish come true starting tonight because I have only just completed 13 nights of regular brushing and flossing.  I hope to have the will power I’m now using to create one more positive habit for health freed up by the assimilation that is bestowed with long term consistent practice.

Ah.  This learning stuff is fun.

Several weekends ago we drove to Bainbridge Island and I took some photos of early spring flowers.  While doing this I found some trash.  The trash turned out to be an embroidered butterfly sachet.  Litter fairy, I found thee.

END_OF_DOCUMENT_TOKEN_TO_BE_REPLACED

Hallelujah President’s Day three day weekend with my mister!  I cooked like a madwoman today, trying to prep for the week so we can break the habit of eating dinner an hour or less before we go to bed.  Cuban black beans, tamale pies, coconut rice pudding, oh my!

After such a long day on my feet slaving, I was ready to sit with a warm computer on my lap and a cup of soothing tea to my side.  I yelped. You should check me out! (I even won best yelp of the day once. I enjoyed my nanosecond of infamy.)

END_OF_DOCUMENT_TOKEN_TO_BE_REPLACED

Life in the country is not what I imagined before moving out here.  That is entirely because my imagination was new love blinded and lacking realistic detail while I was imagining it. Frankly, I imagined laying face down in the dirt next to last night’s smoldering fire.  So…what?  I ask myself now.  How long did you think that was going to be fun?   END_OF_DOCUMENT_TOKEN_TO_BE_REPLACED